I will be presenting a new body of work at the City and Guilds of London Art School MA Show 2011.
Opening on Wednesday the 14th of September until Sunday the 18th of September.
Visit the link below for more details:

I am deeply influenced by phenomenological, sensational events: the Aurora Borealis, intense twilight and dangerously cold temperatures within the Arctic forests of Lapland during mid winter. During these solitary moments, amongst Wilderness, I experience a heightened awareness, of existence.

I attempt to bring together, within my painting, two separate experiences: one is in nature, and one is in paint. The relation between the two is not of ‘duplication’ but what I refer to as ‘equivalence’. These experiences are bound with a sense of openness of being that is experienced in these encounters with Wilderness, to create a Wilderness in paint.

I have developed a new surface to work on; layering semi-transparent synthetic ‘veil’ over highly refined primed cotton. The unusually reflective quality of the veil produces an uncertainty to the viewer and level of obfuscation of the layer below. The veil’s synthetic nature creates space and depth, throwing up allusions to the nature of existence and sensation, that one reads and experiences in the work simultaneously: to the allegory of Plato’s cave and Locke’s ‘veil of perception’.

As I have moved from a depictive/ narrative way of working, I am exploring a more, expressive and instinctive method of painting which pays attention to paint and surface simultaneously, on a macro and the microscopic level. Scale has engaged a performative bodily experience of painting through an internal experience of dissolution of the self, as Schiller and Gadamer discuss through a state of play.

Friedrich Schiller writes:
Man only plays when he is in the full sense of the word a human being, and he is only fully a human being when he plays.

Art, understood as play finds its true perfection in a Transformation into structure.

Citing Aristotle, Gadamer connects movement, particularly self-movement, is synonymous with vitality, with life force. Thus Gadamer reasons that the being of play is always a realisation, sheer fulfillment, energia that has its telos within itself. Realisation gains it fullest achievement in Art’s medial process of transformation into structure. 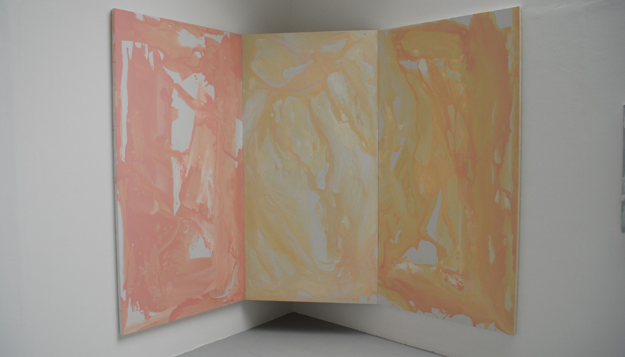